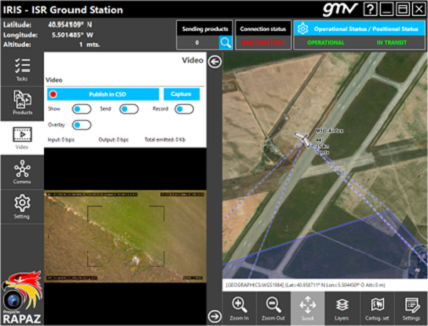 The IRIS system, developed by the multinational technology firm GMV for the Spanish Ministry of Defense, has demonstrated outstanding performance during NATO’s REPMUS 22 exercise.

NATO’s REPMUS (Robotic Experimentation and Prototyping Augmented by Maritime Unmanned Systems) is the largest military exercise organized by NATO with experimental participation by unmanned maritime systems (aerial, ground, and underwater). Its objectives include demonstrating the current and potential technological and operational capabilities of NATO and the various allied nations and providing experimentation and development opportunities for C4I command and control systems, with support from the participating industries.

The latest edition of the exercise, known as REPMUS 22, was led by the Portuguese Navy, and it took place in that country from September 5‑23 in the area of the Troia Peninsula and Sesimbra. The IRIS system has demonstrated its versatility and level of interoperability, for integrating the unmanned vehicles (UxVs) of the participating Spanish companies (ALPHA, SWARMING, and AIRFOX) with the rest of the command-and-control systems. This has allowed for monitoring and use of the information at the command stations and facilitated its use in a variety of operational scenarios.

IRIS has implemented the I2I protocol for exchange of traces and control signals between the allied C2 systems and the Spanish UxVs, for assigning various missions (reconnaissance, patrol, escort, etc.), and with coverage of the complete flow between assignment and execution. To do this, IRIS provides the UxV manufacturers with a solution that allows simple integration into NATO environments, while complying with the various standardized protocols (STANAG4559, FFT, NVG, Link16, etc.). This also makes it possible for the command stations to distribute other information of interest (such as traces, areas, tasks, images, and streaming video).

The interconnection between the unmanned vehicles and IRIS has taken place through the use of the vehicles’ own communication systems and 5G technology provided by Spanish telecom operator Telefónica, with excellent results. GMV was congratulated by the rest of the participants for its full compliance with the integration objectives, and for its collaboration with the USA and UK for redefining protocols and improving procedures for future versions of the I2I protocol, with a view towards increased standardization. In addition, the TALOS command and control system was used during the exercise, which allows information on the tactical picture to be presented in a complementary manner.

The IRIS system, which has been developed by GMV as part of the Spanish Directorate General of Weapons and Material’s RAPAZ program, under the Subdirectorate General of Planning, Technology, and Innovation, currently offers a high capacity for ISR (intelligence, surveillance, and reconnaissance) interoperability, which are essential aspects of any military operation. IRIS is also contributing to development and maintenance of the required level of situational awareness. It provides information and intelligence for those making decisions, as well as for those executing those decisions during operations. It offers a simplified interface that allows integration of sensors and platforms into the command and control and intelligence network, providing interoperability with other C4ISR (Command, Control, Communications, Computers, Intelligence, Surveillance and Reconnaissance) systems and media for Spain and its allies. In addition, it allows integration of additional UxV media for the participants in the REPMUS exercise, which will culminate in 2023.