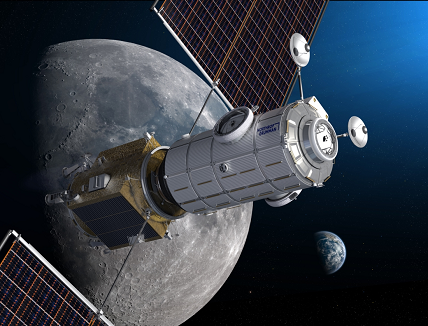 With HALO, Thales Alenia Space is strengthening its contribution to the Lunar Gateway

Thales Alenia Space has signed a contract with Northrop Grumman to develop the pressurized module for HALO (Habitation And Logistics Outpost) that will be one of the first two elements to form the lunar Gateway which will be launched in late 2023.

HALO is planned to be launched together with the Power and Propulsion Element (PPE) and will be the initial habitat for astronauts visiting the Gateway. Its primary purpose is to provide basic living space for astronauts and prepare for their trip to the lunar surface. It will provide command, control and data handling capabilities, energy storage and power distribution, thermal control, communications and tracking capabilities. It will be equipped with 3 docking ports for visiting vehicles and future modules, as well as space for science and stowage. With NASA’s Orion spacecraft docked, it will be able to sustain up to four astronauts for up to 30 days as they embark on, and return from, expeditions to the lunar surface.

Thales Alenia Space will be responsible of the design and manufacturing of the HALO primary structure (the pressurized module), the module and vestibule pressure control, part of the meteoroid protection system as well as the structure interfacing the NASA docking systems. The HALO design is derived from Northrop Grumman’s Cygnus spacecraft, which Thales Alenia Space is a longstanding partner on. Cygnus is a human-capable vehicle that delivers supplies, spare equipment and scientific experiments to the International Space Station with 14 successful missions to date. HALO will have the same 3m diameter as Cygnus, but will include a 1m stretch in length to meet habitable volume needs for visiting crews, bringing the total HALO length to about 7m. HALO will also benefit from the heritage of the Cygnus Pressurized Module design and production process already in place.

“It is a great, fantastic challenge for our company to again be part of the amazing adventure of moving back to the Moon – in particular paving the way of the lunar outpost by being involved in one of the  first 2 Gateway elements to be launched, in addition to providing the European contribution with ESPRIT and I-HAB. “We see this result as a concrete step towards future exploration missions and thank again Northrop Grumman for the long and unalterable trust they put in Thales Alenia Space technologies, capable of meeting the boldest challenges”, declared Massimo Claudio Comparini, Senior Executive Vice President Observation, Exploration and Navigation at Thales Alenia Space.

Walter Cugno, Vice President Exploration and Science Domain at Thales Alenia Space added “By leveraging the active Cygnus production line and flight proven expertise, Thales Alenia Space will bring to Northrop Grumman the unique capability of providing an affordable and reliable HALO module in the timeframe needed to support lunar exploration. This more than 10-years success story as well the strong Thales Alenia Space expertise in deep space habitats, will allow us to design and manufacture this new lunar Gateway module in the respect of safety and comfort for the astronauts”.

About Artemis: moving forward to the Moon in 2024! The Artemis program will proceed in three phases: Artemis 1, a non-crewed flight to test the launch system and the Orion spacecraft together; Artemis 2, a first crewed flight of Orion; and Artemis 3, to land astronauts on the Moon in 2024. The program will set up sustainable structures on the Moon and in lunar orbit to carry out further human exploration of the surface and various scientific investigations. The Gateway will be a key to this program: it will be used as an outpost for astronauts on their way to the Moon, and as a laboratory to carry out scientific research, and thus support the development of sustained Moon exploration by the end of the decade.

About lunar Gateway: This outpost in lunar orbit is one of the pillars of NASA’s Artemis program, supporting sustainable exploration to the Moon and beyond. It is being implemented through international cooperation, currently involving NASA (United States) andESA (Europe). Discussions with other international partners continue. The Gateway, weighing about 40 metric tons, will be automatically assembled piece by piece and will be placed in a near rectilinear halo orbit (NRHO)* around the Moon. The configuration will mainly comprise habitation modules for the crew, power and propulsion systems, logistics modules, communications with the Earth and Moon, a robotic arm and docking ports. It is not intended for permanent occupancy, but as it evolves, it will be able to host 4-person crews for periods of one to three months. Gaining new experiences on and around the Moon will prepare NASA to send the first humans to Mars as early as 2030s, and the Gateway will play a vital role in this process.

About Thales Alenia Space involvement in the moving forward to the Moon challenge
Already providing the thermo-mechanical systems for Orion European Service Module and strongly involved in European Space Agency contribution in the Gateway with ESPRIT and I-HAB, Thales Alenia Space is also involved in NASA’s Human Landing System (HLS) initiative, as part of the Dynetics-led consortium recently chosen by NASA as well as in VIPER, the rover that NASA will send to the South Pole of the Moon in search for water.