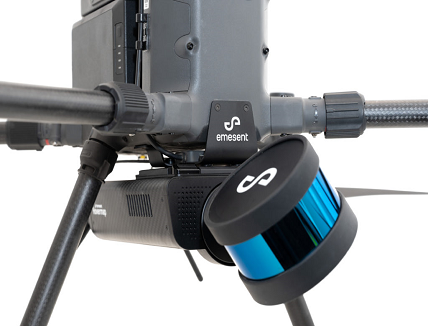 Hovermap, which can be hand-held or mounted to a drone, uses Puck LITE lidar as its primary perception and mapping sensor. Equally capable above ground or underground, indoors or out, Hovermap combines advanced collision avoidance and autonomous flight technologies to map challenging, inaccessible areas. Hovermap has a colorization feature for its 3D point clouds that brings additional context for visualization and analysis.

Hovermap provides high-quality data capture for the mining, construction/infrastructure, forestry, defense, oil and gas, and film industries. Hovermap customer Daniel Thomas of XM2, a leader in drone cinematography in Australia, said, “When operating on a live set to capture VFX data in the film industry, speed is key. We use the Hovermap now to cover areas that traditionally had no effective lidar capture method, including above buildings and around complex set pieces, in a fraction of the time a terrestrial lidar takes. We can now operate between takes, capturing areas that would normally take an hour in five minutes.”

“The Velodyne Puck LITE lidar is an extraordinary sensor for mobile mapping systems due to its compact size, light weight and high performance,” said Dr. Stefan Hrabar, Emesent CEO. “The sensor helped us create game-changing technology that can obtain vital data in challenging environments in real time without risking the machine or operator safety.”