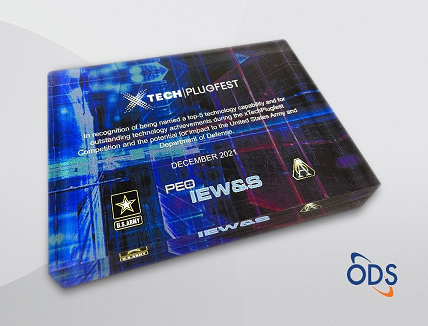 Recognized for its outstanding technology achievements and the potential for impact to the United States Army and Department of Defense, Orolia Defense & Security, the leading U.S. Resilient Positioning, Navigation and Timing Mission Partner, was selected by a panel of judges as a finalist during the 2021 xTech Plugfest competition. Hosted by PEO IEW&S, PM-PNT, the event, which allowed industry participants to demonstrate C5ISR/EW Modular Open Suite of Standards (CMOSS) capabilities via PNT cards, switch cards, and chassis, was held at the Open Innovation Laboratory (OIL) on Aberdeen Proving Grounds, Maryland November 8-19.

CMOSS prescribes criteria for integrators that reduce the size, weight, and power (SWaP) of C5ISR and EW systems while increasing their flexibility and adaptability by enabling the sharing of hardware and software components. Orolia submitted a CMOSS timing card and was formally recognized as a top-5 winner at OIL’s open house (totaling 200+ attendees) for demonstrating their capabilities and commitment to supporting the US Army and DoD in pursuit of future CMOSS PNT solutions.

“I am extremely proud of our team for their efforts and sharp-wittedness in developing and presenting this technology at an accelerated level,” said Conrad Meyer, director of business development at Orolia Defense & Security. “We are honored to have taken part in this event and to be distinguished among many contenders.”

Orolia’s prototype has a plug-and-play architecture powered by its FlexFusion engine, with additional capability for jamming and spoofing detection via its patented BroadShield software and is designed for easy in-field-upgradability. Orolia plans to release a commercially available, fully compliant CMOSS/SOSA PNT card product for use in military air and ground-mounted systems in 2022.

From essential timing & synchronization to all-in-one PNT, Orolia Defense & Security offers modular solutions based on open standards, made to be secure and rugged, providing resiliency, high performance, and continuous operation in the field. Learn more at www.OroliaDS.com/resilient-pnt.