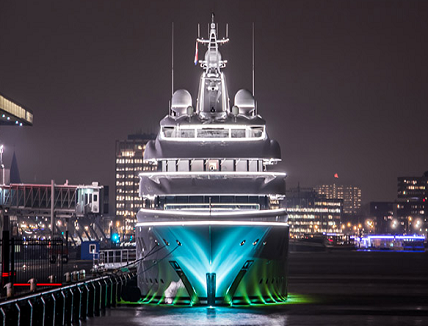 One of the new vessels will be fitted with Sonardyne’s Vigilant forward looking sonar (FLS), while the second will have the company’s Sentinel intruder detection sonar (IDS) system installed.

Vigilant FLS builds an easy to interpret 3D visualisation of the seafloor terrain and any navigation hazards out to 600 m ahead of the vessel in real-time, significantly reducing the likelihood of collisions and groundings. When exploring unfamiliar and unchartered areas, Vigilant’s high resolution imagery shows the yacht’s crew exactly what lies ahead and where the ideal anchorage spot can be found. While its route history mapping features makes plotting a reciprocal course and the next leg of a passage simple. In open waters, Vigilant also provides configurable automated depth and collision warnings out to an industry-leading 1.5 km and down to 150 m water depth.

Suitable for both permanent and temporary vessel installation, Sentinel detects, tracks and classifies underwater threats at up to 1.5 km range to provide a rapidly deployed and activated perimeter intrusion capability to help safeguard large private yachts when at anchor or berthed in a marina. It is also regularly supplied to protect busy commercial ports, naval bases, VIP waterside residences and critical national infrastructure facilities including power stations and desalination plants.

MarineGuard Systems Ltd, a bespoke provider of integrated security systems and products based in Southampton England, has been working with Sonardyne for many years, working on some of the largest 100 metre-plus long yachts.

“Having worked with Sonardyne on multiple projects, they are without doubt leading the way with sonar technology and subsurface surveillance and protection.” Paul Smith, Chief Commercial Officer, MarineGuard

Derek Lynch, Global Business Manager for Ship Systems at Sonardyne, says, “Whether you’re planning to navigate through shoals, reefs, areas known to contain wrecks or a narrow channel, Vigilant’s stunning bathymetry, available at an impressive 20 times water depth ratio, provides the crystal clear view you need to avoid any hidden hazards. Equally, if you’re blue water cruising, it’s always there ready to warn you of anything lurking beneath the water line, such as lost shipping containers or even icebergs, if you’re an intrepid owner exploring arctic climes.

“In a world where security threats from underwater are just as likely as above water, Sentinel provides the peace of mind you need, while moored, in port or at a berth. With more than 150 systems installed worldwide and an unrivalled reputation, it is the undisputed leader in the field.”