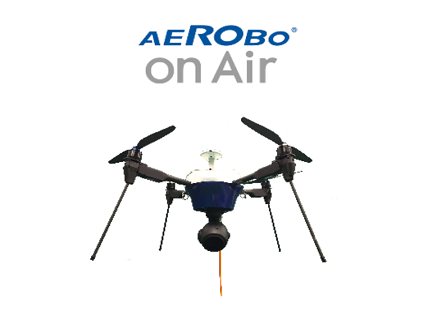 Aerosense Co., Ltd.’s wired drone system Aerobo on Air is now on site for unmanned construction by a consortium such as Aktio Co., Ltd. It was used as a video production equipment necessary for construction machinery operation. Aerobo on Air has been used in live broadcasting sites, etc., taking advantage of its features such as long-time wired flight, safe and secure flight, and reliable video transmission, shown that it can play an active role.

Features of Aerobo on Air

Aerobo On Air can fly for a long time because it is powered by a composite cable, and it also controls flight through this composite cable, so it can fly stably even at unmanned construction sites where wireless communication flies.

(2) [CONVENTIONAL ISSUE: IT IS DIFFICULT TO ADJUST THE IMAGE WITH A FIXED CAMERA] ➡ FREELY CHANGE THE AERIAL SHOOTING RANGE AND ALTITUDE ACCORDING TO THE MOVING SITE

③ [CONVENTIONAL ISSUE: CHECK LIVE VIDEO AT THE LOCATION OF THE DRONE] ➡ SIMULTANEOUS COMMUNICATION FROM THE HEAD OFFICE VIA NETWORK COMMUNICATION

With this Aerobo On Air, low-latency, uncompressed aerial video can be viewed even at remote locations by delivering on-site video in real time via a communication network. As a result, even in the case of Corona, the head office was able to see the same images as the people in the field and communicate closely, which contributed to the smooth progress management of the field.

Through the development, manufacture and sale of wired drone systems, Aerosense will not only continue to provide new video experiences, but will also contribute to improving the safety and productivity of unmanned construction sites.