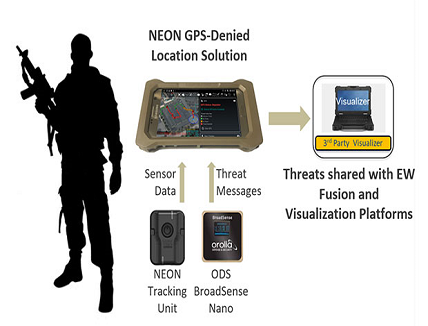 NEON Personnel Tracker Military (PT-MIL) uses a suite of patented algorithms that fuse inertial sensor, GNSS, ultra-wideband (UWB) and other inputs to deliver reliable position data to dismount personnel operating in the presence of compromised or intentionally denied GNSS signals. With the new EW Kit functionality, warfighters will receive real-time situational awareness into jamming or spoofing threats at their immediate location and from other dismount personnel sharing data over the TAK network. The EW Kit is integrated via Soldier plug-ins, enabling threats discovered and mapped by dismounts to be fused into the overall NAVWAR threat picture.