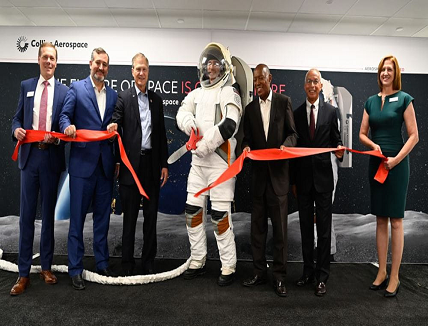 With over 40 years in the Houston area and the current site filled to capacity, Collins’ new facility in the Spaceport represents a $30 million investment. The increased footprint allows for expanded operations, manufacturing and testing and is also expected to add an additional 300 jobs in the coming years.

“Collins’ long history of innovating, developing and delivering the critical systems that have played an integral role in humankind’s exploration of space takes yet another step forward with the opening of this state-of-the-art facility at the Houston Spaceport,” said Phil Jasper, president of Collins Aerospace’s Mission Systems business. “This strategic location and our strong local partnerships are driving the next-generation technologies that will enable humankind to live, work and play in space.”

Along with Collins’ existing space facilities in California, Connecticut and Illinois, the new Houston Spaceport location will support the development and testing of several key space systems, including the next-generation spacesuit – which astronauts could wear to work outside the International Space Station and on the moon – as well as Collins’ Universal Waste Management System and trash compactor.

“The expansion of Collins Aerospace at the Houston Spaceport is a crucial next step in the city’s journey to be the country’s premier next-generation aerospace and technical hub,” said Houston Mayor Sylvester Turner. “The innovative technologies created at this facility will also serve as the critical systems to support humankind’s future space exploration and habitation. We look forward to fueling the future of aerospace right here in Houston.”

Some 10,000 square feet of the facility will be dedicated to Houston’s first-ever spaceflight incubator, where startups, universities and industry professionals will collaborate using robotics, medicine, additive manufacturing and more to solve complex space technology challenges.