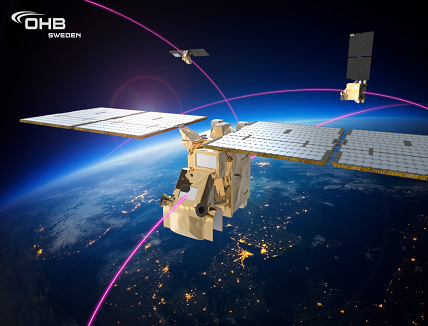 Part of the ESA’s Earth Watch programme, Artic Weather Satellite aims at demonstrating the usefulness of radiometric measurements in improving weather predictions globally and specifically in the Arctic region.

OHB Sweden has been appointed as the prime contractor for the development of this program by the European Space Agency and will use ANYWAVES’ antennas for its satellite telemetry, telecommand, geolocation and also for the data downlink.

By providing global measurements of atmospheric temperature and humidity with frequent revisit times, the polar-orbiting Arctic Weather Satellite (AWS) mission will complement the European MetOp and its counterpart US NOAA Joint Polar Satellite System. Its launch is scheduled for 2024 and a constellation may follow this prototype mission aiming to allow very short-range weather forecasting, or ‘nowcasting’, in the Arctic.

In this context, antennas are then a key equipment regarding the success of the mission.

Artic Weather Satellite will onboard three different types of antennas delivered by ANYWAVES no later than December 2022.

Regarding the telemetry and the telecommand, S-Band TT&C antennas will be supplied. Orbiting at a 600 km altitude, AWS’ geolocation will be able thanks to an L1/E1 band antenna designed via ANYWAVES’ secrete sauce based on additive manufacturing.

Last but not least, the payload antenna ensuring real time data downlink will be an L-Band antenna; a key equipment for the mission success.

So far, this first order from the European prime contractor OHB Sweden amounts a deal to tens of thousands of Euros for the French antennas manufacturer. It could reach several hundreds of thousands if the decision is made to continue to build the the constellation.

According to Nicolas Capet, ANYWAVES’ CEO: ‘This order from OHB Sweden is very significative. First, because being once again selected by an historical European satellites manufacturer is a true recognition of our know-how. Then, because Artic Weather Satellite‘s mission perfectly pictures what space can bring to humanity: a better understanding of Earth as well as a major benefit for citizens thanks to better weather forecasting.’

According to Benoit Mathieu, OHB Sweden’s CEO: ‘OHB Sweden is happy to collaborate with the well-established antenna manufacturer ANYWAVES as their products fit the full range of antennas needed for this mission.’

When ESA launched the Artic Weather Satellite project, its objective was to embrace a New Space approach by proving new concepts in a cost-effective and timely manner.

By 2024, OHB Sweden, as prime contractor, as well as ANYWAVES as payload antennas provider, will both try the challenge to demonstrate the usefulness of radiometric measurements in improving weather predictions.

Teams are already at work to achieve their mission and to pave the way to a new European satellite constellation.