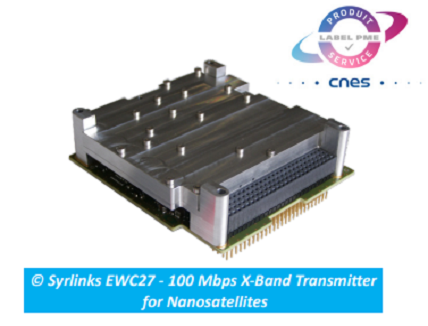 Syrlinks and Nara Space, a newspace startup in South Korea that builds nano satellite constellations, are proud to announce their partnership in the integration of Syrlinks’s compact X-Band Transmitter – EWC27.

Nara Space has developed a unique 12U satellites called BUSANSAT which will collect marine spatial information and monitor marine fine dust. The 1 year lifetime satellite will be launch in 2024.

“This is a great opportunity for us to support future major players with products that have a strong heritage and will ensure the success of the mission.” says Ronan FOUBERT, Nanosat/ Cubesat product owner at Syrlinks.

“It is a great recognition of a work of several years to design New-Space RF communication compact designs, suitable for nanosatellites and bringing cutting-edge transmitting performances.”, adds Eric PINSON, Director of Space activity at Syrlinks.

«I am delighted to be able to increase the probability of mission success by using EWC27 famous for being the most reliable X-band transmitter in the small satellite market. We are using EWC27 not only for BusanSat, but also for Observer-1, Nara Space’s first standard satellite that will be launched next year. We will build a future-oriented cooperative relationship with Syrlinks» said Jungkye Lee, director of satellite development at Nara Space.