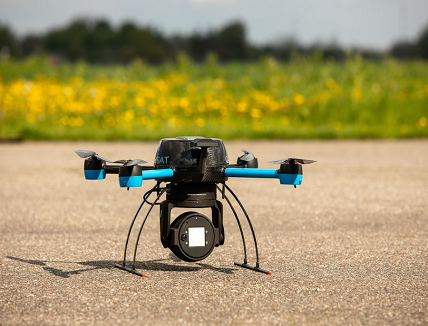 The satellite & space communities can vote to help QuadSAT win the Satellite Technology of the Year.

QuadSAT’s system for antenna testing and calibration has been nominated for Via Satellite’s 2021 Satellite Technology of the Year Award. The nominees are chosen based on innovation, benefit to the industry, and overall disruption to the satellite landscape.

Mark Holmes, Editor, Via Satellite, said: “The Satellite Technology of the Year award, less than five years old, goes from strength to strength. We had a record number of companies taking part in the process and the competition has been ferocious. There are so many great technology stories in our industry, that asking us to pick just one is getting harder each year. Our industry has a wonderful strength in depth from seasoned tech companies, to those starting out and trying to shake up the established order.”

QuadSAT’s drone-based system provides users with flexible and accurate antenna testing and calibration. A broad range of testing missions can be undertaken, depending on user requirements, and antennas can be tested regardless of location. The system provides pre- and post-flight software to ensure repeatability, automated measurements, ease of operation and data delivery in a uniform format.

The winner of the 2021 Satellite Technology of the Year will be determined by a combination of the Via Satellite editorial team, including Editorial Director, Mark Holmes, and votes that come directly from industry. The public can vote for QuadSAT’s system for antenna testing and calibration online.

Joakim Espeland, CEO, QuadSAT, commented: “With our drone-based system we are aiming to improve accessibility to antenna testing, delivering a cost-effective way to provide reliable testing. The Via Satellite Satellite Technology of the Year awards are widely regarded as prestigious awards, so we are especially  proud to have made the shortlist. This is perfect timing for us as we are currently raising our Series A investment round and we look forward to the awards ceremony at SATELLITE 2022.”

From the host of the prestigious “Satellite Executive of the Year Award”, Via Satellite has a longstanding history of recognizing the people leading the charge for the satellite industry.

Voting closes at noon ET on March 22. The winner will be announced at SATELLITE 2022 on Wednesday, March 23 at the Via Satellite Awards Luncheon, which is open to all conference-level attendees. Register for SATELLITE here and press can register here.

For more information on the award, or to vote for QuadSAT, please visit https://www.satellitetoday.com/vote.