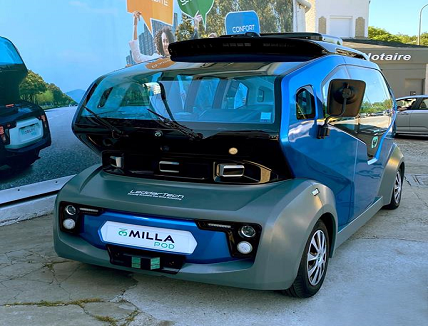 The MILLA Group, located in France, develops and markets an autonomous electric shuttle. MILLA is a leader in mobility and an essential resource for all public and private organizations wishing to implement an adapted, efficient, and sustainable mobility solution. MILLA will feature their fully autonomous electric POD vehicles, equipped with the Leddar Pixell, at two major June events in France.

MILLA will showcase its fully autonomous POD shuttle at the world-renowned VIVA Technology Conference. This prestigious event involves representation from 125 countries. This year will feature such esteemed speakers as Tim Cook, CEO of Apple and Mark Zuckerberg, CEO of Facebook, and include the participation of over 13,000 startups.

The MILLA fully autonomous POD will take center stage at the Smart & Sustainable Mobility event organized on-site at the French Grand Prix Formula 1 race, one of the world’s most popular sporting events. The MILLA POD will demonstrate its world-class technology and innovative approach to enhanced safety. The POD will operate fully autonomously without an onboard safety driver. Utilizing various sensors, including the Leddar Pixell, the POD creates a virtual safety and security bubble. Unlike many other autonomous shuttles, the MILLA POD will be supervised remotely by a monitoring engineer who can intervene and take control of the vehicle if needed. This innovative safety redundancy system is being further developed and will soon be available to enable one person to monitor up to 10 PODs at any one time. MILLA engineers have pioneered a significant step towards even greater safety technology that accelerates consumer confidence in the adoption of fully autonomous vehicles.

“I congratulate the MILLA Group on their participation in these prestigious events,” stated LeddarTech’s CEO, Charles Boulanger. “LeddarTech is honored to have contributed to their sensor suite by having our Leddar Pixell selected by the MILLA Group. The MILLA Group is committed to the safety and welfare of passengers and vulnerable road users, and LeddarTech shares their commitment. This recognition for safety first was also recognized by the RATP Group, a State-owned public transport operator present in 13 countries and on 4 continents, tasked with evaluating and qualifying autonomous public vehicles. The RATP reported that the operating systems of the MILLA POD, which included the Leddar Pixell, meet the stringent qualification requirements,” concluded Mr. Boulanger.

“The MILLA Group is proud of the innovative approach we have taken in the development of our autonomous vehicles,” stated MILLA Group’s President Frédéric Mathis. “The decision to engage with LeddarTech has enabled us to have full confidence in the ability of our MILLA PODs to operate safely and efficiently,” Mr. Mathis continued. “It is a tremendous opportunity for our company and a testament to our technology to have the opportunity to demonstrate our PODs at Grand Prix de France de Formule 1 / Smart and Sustainable Mobility and to present our technology at VIVA Technology Conference,” concluded Mr. Mathis.