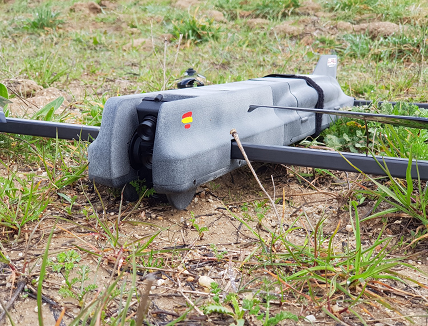 Developed by Aurea Avionics & GMV, the Passer is an unmanned aircraft designed to provide intelligence, surveillance, and reconnaissance capabilities to defense & security users

Personnel from the Spanish Army’s Paratrooper Brigade (BRIPAC) have evaluated the operability of the Class I Micro Passer UAS system from Aurea Avionics and GMV, a 1.9 kg unmanned aircraft designed to provide intelligence, surveillance and reconnaissance (ISR) capabilities to defense and security users. The event took place in October at the Casas de Uceda Firing and Maneuvering Range (CMT) in the province of Guadalajara. In addition to the members of the BRIPAC, there were also staff from the General Directorate of Armament and Material (DGAM) and the companies Aurea Avionics and GMV, developers and owners of the system, in attendance. The scheduled tests are part of the RAPAZ project, led by the Sub-Directorate General for Planning, Technology and Innovation (PLATIN), to assess the different options of Class I RPAS that exist in the Spanish market.

The specific objective of the session was to carry out extensive testing on the operability of the Passer UAS, performing specific activities to evaluate its detection, recognition and identification capabilities, sound and visual signature, operational ceiling, range, and advanced flight modes, including flight without GPS, loss of communications, and other emergency procedures. For the evaluations, various types of operations were planned such as take-off, flight over areas of interest, identification of objects, and the return flight home. In the different activities that were carried out, the autonomy, ease of use, and the swift deployment of the aircraft stood out in particular. These campaigns are very useful so that the units to which the RPAS are destined can contribute with their operational experience, in addition to allowing Defense to supervise the development of the systems and adapt them to their real needs and requirements. Aurea Avionics already has experience with these procedures, since the Seeker UAS was part of the RAPAZ project before it was incorporated into the Spanish Army’s BRIPAC, and the Navy’s BRIMAR.

The Passer UAS is a compact system designed especially for the Armed Forces, since its low weight, its vertical take-off, its 60-minute autonomy, one of the highest of its category, and its 6-kilometer communication range make it especially useful in missions where situational awareness is required in ranges of distances that other Micro rotary wing systems cannot reach. The aircraft is controlled using a joystick-style Remote Handheld Controller (RHC) that is intuitive and easy to use, so that a single operator can focus on the intelligence-gathering tasks and forget about having to pilot.

In addition, the Passer UAS carries a gyro-stabilized dual payload that provides real-time video, captured by a set of two sensors in visible spectrum (2x EO), with optical and digital zoom in stages, and a thermal sensor (1xIR) with digital zoom. Along with the real-time image, the system processes various sources of information to obtain the coordinates and distance of the target, as well as the location and status of the aircraft. In addition to being used by the operator, both the video and the information are transferred to remote control posts by means of the VidStream coding and transmission system, encrypted using 4G networks or dedicated point-to-point connections.

Following in the wake of the Seeker UAS, the Passer UAS combines a product with 100% Spanish DNA, both in its design and its technological development, manufacturing, and maintenance, with a strong international projection thanks to its integration with command centers that meet NATO standards, allowing it to be both a part of the Spanish Armed Forces modernization project and to be fully integrated into the growing cooperation and collaboration of Defense industries at the European level. This will help facilitate the fulfillment of the missions assigned to the armies in scenarios where the great variety of risks and threats requires an increasing effort to reduce the uncertainty of the situation and to reduce the troops’ vulnerability.