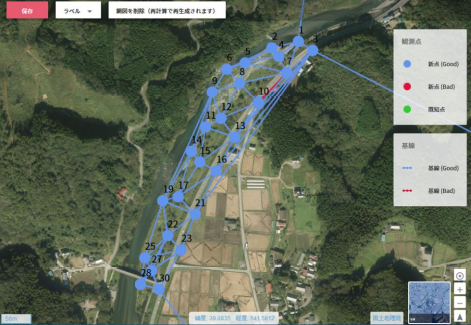 Once the GNSS log data obtained by the AEROBO markers is uploaded to AEROBO cloud, a series of three-dimensional network average calculations required for reference point surveying is automatically executed (automated methods are patent pending). In this report, we introduce the accuracy and the level of efficiency gained, using actual reference point survey as an example.

AEROBO marker is a GNSS logger equipped with GNSS receiver. It is lightweight and has the advantage of ease of operation. In December 2019, the Geospatial Information Authority of Japan approved the registration of the instrument, and it is now available as a single frequency GNSS survey device for all reference point surveys, including mapping. (https://psgsv2.gsi.go.jp/koukyou/kihon/kisyu/gnss-2.htm)

Once the on-site observation is complete, the observation log is uploaded to AEROBO cloud. Once uploaded, the following sequence is required for the reference point survey to be performed automatically:

Using conventional methods and a total station to survey 25 new points would typically involve two people on site for one day. The subsequent post processing work using net average software would take some 3 hours, plus a further 2 hours for the final calculation. A total of about 14 hours work.

Using AEROBO markers and AEROBO cloud, we were able to complete the same job in 6 hours, representing 60% increase in efficiency.

Unlike a total station, AEROBO markers can be measured simultaneously. Meaning that the more observation points, the greater the level of efficiency of operation. Furthermore, the fact that calculation can begin as soon as the log has been uploaded greatly contributes to the overall time saving.

In addition, to confirm the effect of the three-dimensional network average calculation, static positioning calculation using only the nearest electronic reference point, Mito (no network calculation) was also performed together.

The results are summarized below.

The baseline length is approximately 18km for Hitachi, 10km in Mito, and 20km in Koda.

Scattered plot notation of the results of Table 2 and 3.
Horizontal axis: Horizontal error, Vertical axis: Vertical error. Both axes are in meters. The right figure shows an enlarged range of the left-hand horizontal axis 0.03 and the vertical axis 0.1. In the figure, the blue point shows the result without the net calculation (Table 2), and the orange point shows the result with the net calculation (Table 3). The number described next to the point represents the observation point number, corresponding to the observation point number described in Table 1.

Table 2 and Table 3 shows coordinate value X, Y, Z in the plane right-angle coordinate system 9 in the cases of “with network calculation” and “without network calculation”. Furthermore, the difference ΔZ from the survey result value in the database is described as a vertical error, and the error size calculated from ΔX, ΔY is described as a horizontal error. The figure above shows the distribution diagram of the horizontal error vs. the vertical error. In this plot, point 9 was excluded since the fix rate is low (less than 10%), rendering the reliability of the value low. (The reception of radio waves at Point 9 is presumed to have been deteriorated due to its location at the base of the large tree.)

In general, when performing GNSS survey with a reference point, it is better to use an existing reference point on the site, as it is possible to obtain a survey accuracy that is consistent with the site coordinate system.

A closed polygonal network of the 73 baselines with each new point being the vertex of the triangular mesh is automatically generated, and the net calculation result was the following.

Even though the computing cost of 73 baselines and their network calculation is normally very high with conventional methods, AEROBO cloud can process them cheaply and automatically, and the deviation of the oblique distance of each baseline vector and the standard deviation of the new point are within the allowable range of the 4th class reference point defined by the reference point surveying work provisions.

Compatible with any GNSS surveying equipment

In October 2019, AEROBO cloud started to support any GNSS surveying equipment other than AEROBO markers and is now able to measure reference points where the nearest electronic reference point is more than 10 km away from the survey site. (That is, it is now possible to do all reference point surveys.)

As of March 2020, AEROBO cloud supports 80% of the report formats that common commercial network calculation software outputs (all major formats are already supported). A list of printable reports is listed at the end of this report. These reports can be submitted to government agencies and other agencies in accordance with the standards and regulations of the reference point surveying work.

Compared to AEROBO cloud, when using a general commercial network calculation software, the degree of freedom is high in terms of a series of reference point surveying processing such as the adjustment function of report layout and the creation of the polygonal network of arbitrary shape. However, it requires editing the polygonal network manually, such as the examination of the calculation results for each step of the workflow. There are a lot of user burdens in a general commercial network calculation software.

With AEROBO marker & cloud, even without knowing the details of the reference point survey, anyone can easily conduct a 3D network average calculation and create the required survey reports. Because it has sufficient performance / calculation accuracy, if the survey plan is set up appropriately in advance, it can be an effective tool for utilizing human resources and reducing survey costs.

UAS In Firefighting: How Unmanned Systems Can Help To Keep The Environment Safe