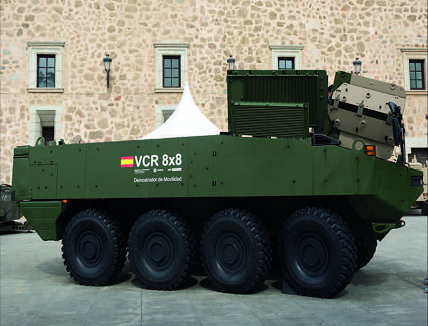 This is GMV’s advanced navigation & timing solution for ground systems, providing positioning information on armored vehicles with or without GNSS signals

The 8×8 Dragón wheeled combat vehicle (WCV, or VCR in Spanish), the most significant program in the history of the Spanish Army, will count on the latest technology in GMV navigation systems. Signed in late August 2020, with TESS Defence for €2.1 billion, it will include 348 armored vehicles, 240 of which will include GMV’s ISNAV navigation system.

The ISNAV system was developed by GMV as part of the VCR 8×8 Technology Program. It meets the demanding requirements of the program and has successfully passed both the mission system integration tests, and the functional tests installed on several demo units. This is GMV’s advanced navigation and timing solution for ground systems, with a design that includes the option of including Galileo PRS capabilities, providing advanced PNT (Positioning, Navigation, and Timing) capabilities, making it possible to determine the position of the vehicle in all kinds of scenarios, including scenarios without a GNSS (Global Navigation Satellite System) signal. ISNAV was designed to be modular equipment that can be adapted to different vehicle configurations, sensors and receivers. GMV plans to produce the 240 ISNAV units at its manufacturing facilities in Tres Cantos, which opened in 2019. The first units will be delivered in the fourth quarter of 2023.

The signing of this contract for the production phase of the VCR 8×8 consolidates GMV as the leading Spanish company in navigation systems for defense, with proven experience in the air, ground and naval sectors on platforms such as the ATLANTE unmanned air vehicle, the SENDA system for F-110 frigates and now ISNAV for the 8×8 Dragón vehicle.

According to José Prieto, Director of Business Development and Institutional Affairs of GMV´s Defense and Security sector, “The ISNAV system supplied by GMV offers the vehicle navigation and timing capabilities that meet the demanding requirements of precision and integrity, which are key to enabling the VCR 8×8 to fully satisfy the needs of the Spanish Army over time. The estimated life cycle is approximately 40 years. This will give our Armed Forces the most modern technologies for their peace and security missions around the world, in a vehicle with an operational, armor and communications level far superior to the current vehicles”.