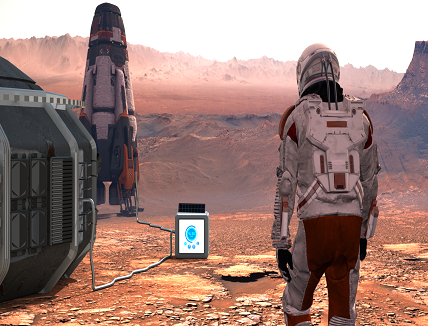 Human Space exploration becomes quite challenging when there is a shortage of resources which are carried through the journey. If the Space Mission last longer than expected duration, then the question arises how the astronauts survive and manage with less fuel, food and water?

Therefore, planning missions needs to be more creative for the survival and to counter the minimization of resources. The European Space Agency (ESA) is working on this issue and planning to make rocket propellant from the sewage of astronauts. Together with the team of Spanish Technological Centre Tekniker, ESA is working on a System that uses sunlight and sewage to produce Fuel on Mars, the Red Planet.

Tekniker’s Borja Pozo explains that they are aiming to make the first reactor which will produce space propellant using the Mar’s air which is 95% Carbon dioxide. The sunlight will act as a source of power for the reactor and astronauts’ greywater would help in the production of the propellant to later create Fuel on Mars.

In space missions the materials can be scarce but Carbon dioxide (CO2) is the most valuable resource for yielding the chemicals and fuels in space. This technological approach of creating a Photoelectrochemical (PEC) System for reducing the CO2 to produce fuels and sewage treatment is of great interest and important when it comes about the future space missions to Mars where the percentage of CO2 is found in abundance.

The Photoelectrochemical System depends on high-efficiency catalytic materials as these are the fundamental component for the catalytic activity of the photoelectrodes to produce hydrocarbons such as carbon monoxide, methane or alcohols from atmospheric CO2 plus wastewater. In this process of creating Fuel on Mars and hydrocarbons for the fuel energy the system will not only act as a fuel production system but also a recycling system because it will detoxify the water which will serve as a recycling method.

ESA Technical Officer, Jean-Christophe Berton, says that the result of this activity could provide ESA with valuable input on the production of propellant on Mars. This can potentially provide input to power remote sites like ground stations on Earth and how to decarbonise our own atmosphere.

For approximately every two years, or 26 months the distance between the Earth and Mars are only close to each other. During this biannual period sending missions is feasible. World leaders in Space Technology and many more big companies are working on human habitation on Mars and many more Mars missions are set for the future. In order to sustain for the longer period on the Mars planet it would be heavy to launch on a rocket the amount of food, water, oxygen and fuel required for the crew.

Therefore, for the astronauts or crew members of the mission needs this kind of system to survive on an alien planet for extended period of time. It would help astronauts on Mars missions and to other locations like Moon or elsewhere in space. Supported through the Discovery element of ESA’s Basic Activities, the project was initiated through ESA’s Open Space Innovation Platform, seeking out promising new ideas for space. For more information visit: www.esa.int