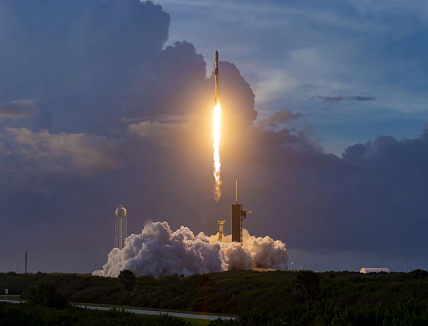 Another flight to Starlink Mission

Space X has recently launched its Falcon 9 rocket, another flight to its Starlink mission carrying 60 Starlink broadband internet satellites. After so many continuous efforts and delays due to weather and ground support equipment issues in the recent weeks, the launch successfully took off on Tuesday morning from Florida’s Kennedy Space Center launch complex 39A (LC-39A) that supports Space X’s all the commercial crew program and Falcon heavy missions.

It is the 13th mission of Starlink satellites and Space X 43rd flight of a previously flown rocket booster. The launch of broadband satellites in low-Earth orbit aims to create a constellation of satellites so as to provide a reliable and affordable internet services via satellites across the globe especially to those remote areas where the reach of standard internet providers is difficult.

Having completed its third flight to space and back on earth to land on Space X’s “Of Course I Still Love You” drone ship, the Falcon 9 reusable booster was also the part of the mission that has again nailed the landing. The booster has previously supported the demo two mission of  Falcon 9 carrying the first human crew of Space X – launch of Crew Dragon’s first flight to the International Space Station with NASA astronauts Bob Behnken and Doug Hurley in the month of May  and the another launch in the month of July with the South Korea’s ANASIS-II mission.

Sapce X is working on the technical issues to avoid delays and problems it faced in the recent launches in order to have a smooth launch for future missions of Falcon 9. Mr Musk tweeted “We’re doing a broad review of launch site, propulsion, structures, avionics, range & regulatory constraints this weekend” He further said “I will also be at the Cape next week to review hardware in person.”

“Once these satellites reach their target position, we will be able to roll out a fairly wide public beta in northern US & hopefully southern Canada, Other countries to follow as soon as we receive regulatory approval.”

A GPS navigation satellite mission for the U.S. Space Force was supposed to launch Friday night from pad 40 at Cape Canaveral Air Force Station. But due to some technical issues with an engine, the rocket prompted an automated abort just two seconds prior to liftoff. The target launch date for the mission has not been confirmed yet.