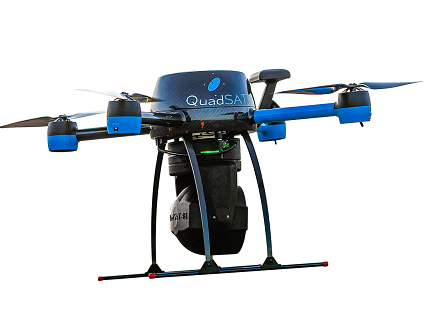 QuadSAT has worked alongside teams from the European Space Agency’s ESOC mission control centre to complete a measurement campaign of large antennas at Kiruna Earth Station. Using the QuadSAT UAS, this represents the first time a drone-based system has been used to measure a 15-metre antenna and to perform tracking tests with it.

ESA has been supporting and funding parts of the development of the QuadSAT Solution through the Agency’s ARTES program. This campaign saw QuadSAT testing KIR-1 (a 15 m antenna) and KIR-2 (a 13 m antenna) at the earth station on behalf of ESA’s ESOC centre.

Typically, testing on large antennas is challenging and complex. Up until now it has only been possible with either satellite tracking, which requires a free satellite segment and coordination with the satellite operator, or with fixed RF beacons, which involve the building of a large structure and oftentimes prove to be a logistic challenge to use, while delivering limited testing possibilities. Using a drone-based system opens the possibility for more comprehensive testing.

Measurements were taken in X-band and circular polarisation at a distance of almost 10 km from the antenna. The QuadSAT system includes a customised payload mounted onto a professional grade UAS. In addition to pattern cuts, raster scans were performed to give a full view of the antennas’ performance. A raster scan delivers a full azimuth-over-elevation view of a portion of the radiation pattern, thus focusing on the overall radiation characteristics of the antenna and ensuring no impact from reflections in the landscape, water or surrounding buildings, among other diagnostics.

Joakim Espeland, CEO of QuadSAT, commented: “We are really excited to be working with ESA following all the support we have received from the ESA ARTES program. We believe that these tests represent a major leap in the capabilities of testing large antennas, something that has been extremely challenging until now.”

Piermario Besso, Head of the Antenna and Infrastructure Section at ESA, added: “The QuadSAT system has the potential to revolutionise satellite antenna testing and measurement, especially as it has now proven its ability to test large antennas. This system will aid in providing quality assurance and improving reliability.”

Following on from this project, customers can now engage with QuadSAT to receive more test data. This allows them to get better use out of their systems and give the operational confidence that has not been possible to attain before.