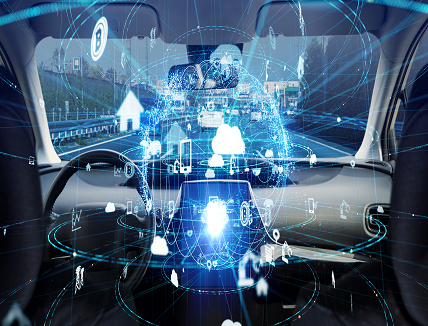 The Indian automobile sector has come a long way since the early eighties and nineties when the only source of entertainment and information inside a vehicle was a standalone stereo music system or radio receiver. The in-car infotainment sector was revolutionised with the introduction of GPS based navigation devices that let commuters travel more easily and also undertake longer road trips without the fear of getting lost or receiving wrong directions. By the late 2000’s this market further evolved with the introduction of smartphones that allowed users to connect their phones with their vehicle, giving them access to a plethora of new functions, wireless connectivity through Bluetooth and access to vehicular information and other services. Thereafter with the introduction of 3G and 4G the smartphone industry saw a boom like never before and created a whole new ‘App’ ecosystem that provided users with access to services such as news, music, video, sports, e-commerce, etc, right at the fingertips.  Information was now available to everyone irrespective of their location. The automobile sector couldn’t be left far behind and then started the integration of the car with the smartphone and so emerged a completely new industry now known as the ‘Telematics’ sector which clocked revenues of over US$ 115 billion globally in 2019 alone.

Telematics combines the usage of GPS with mobile communication and vehicular communication and completely changed the way a user can communicate with the vehicle. Vehicular services such as in-built navigation, location based services, vehicular tracking, emergency call functions, tow alerts, theft alerts, vehicular health alerts and information, geo-tagging became a reality and also led to the development of infotainment services like online news, music, video etc which could now be displayed on the in-car entertainment system seamlessly and it is now very common to see all new vehicles equipped with a telematics system.

The automobile industry is continuing to evolve and the next generational change that is emerging globally is a form of vehicular communication system for automobiles known as “Vehicle-to-Everything” or V2X. V2X is primarily geared towards improving the safety and security of commuters and pedestrians on roads, creation of priority passage systems for emergency vehicles and also enables future advancements in automobile technology such as autonomous driving. There are several V2X applications that are now being used globally, a few popular ones include applications such as Electronic Emergency Brake Light warning system, Collision Warning systems, Blind Spot Warning system, Lane Change Warning system, Intersection Movement Assist system, Do Not Pass Warning system, Turn Assist system, Curve Speed & Warning system, Road work and closure warning system, Signal Phase and warning system, pedestrian, bicycle and 2-wheeler warning system, school zone and other no horn zone warning system and several other systems that are being developed and evolving every year as new use cases are found and thereafter addressed through V2X. Countries such as Japan, the United States, China, and others in Europe, have already introduced wireless communication in automobiles. Meanwhile many major players in the automotive industry are also manufacturing vehicles equipped and ready with V2X. With connected cars now becoming a reality in India, very soon we will see the adoption of V2X in India as well.

A commonly asked question is how do V2X systems communicate with vehicle, infrastructure and pedestrians? V2X communication currently happens through several technologies such as Dedicated Short-Range Communications. V2X communication through dedicated short range operates across several frequency bands, while V2X communication through mobile networks operates across different cellular bands (3G/4G) as available across different countries. As V2X solutions are primarily developed for safety and warning system, real time direct communication between V2X devices is of the utmost importance. Communication that has almost no latency, low attenuation, better wraparound signal capability, high signal permeability that can penetrate through buildings and other urban infrastructure with no loss of signal is vital for traffic safety related V2X applications. Communication using mobile networks do not meet this criteria as the communication between devices is not direct but done through cellular bands. The signal needs to be first relayed from the V2X device to a base station and thereafter to the destination mobile network base station from which the signal is then transmitted to the end V2X device. This requires a certain time lag to communicate. Therefore, though communication through mobile network has higher data carrying capacity,  the communication is not in real time, which makes them better suited for use in a wide variety of non-safety applications such as telematics and infotainment solutions where the data size is large and real time communication is not critical. For e.g. A driver in a V2X equipped vehicle that is nearing an intersection with a blind spot may not be able to see a vehicle or 2-wheeler approaching the intersection, however with the V2X system kicking in, the V2X receiver on the road detects the approaching 2-wheeler and immediately in real-time informs the driver to slow down, thereby allowing the driver to take remedial action. This is only possible as the communication is happening in real time between the V2X receiver on the road and in the vehicle. Such a scenario would not be possible if the communication is happening through a mobile network. The communication delay of even a few seconds would be critical as the driver will not receiving the warning information in real-time and would have already taken the turn, leading to a collision. Therefore, safety related functions are best suited for DSRC based V2X communication and mobile communication is better suited for Telematics based infotainment services

Further advancements are expected in the V2X and Telematics space with the launch of 5G. 5G is the fifth generation of wireless technology. A step up from the current 4G LTE, the next-generation 5G expands the capabilities of mobile networks substantially. With 10x faster speeds,  enhanced connectivity and large network scalability, 5G is expected to provide a significant boost to entertainment, education, medical infrastructure and public security. With the introduction of 5G based mobile communications around the corner, we can expect several advancements in the automotive sector as well. Automotive technologies such as smart transportation, in vehicle infotainment, navigation and enhanced in-vehicle experiences are all set to benefit from the introduction of 5G technology. The expected speeds and high data transfer capability will allow telematics providers to offer the next generation of in-car infotainment services. However its early to say how successful the adoption of 5G would be for V2X as there are several barriers to adoption when it comes to utilising 5G technology for V2X applications. Some being:

Considering these shortcomings, 5G will remain best suited for Telematics applications and not for V2X applications.  To address these challenges, an alternate or complementary solution to 5G in the automotive sector needs to be explored as well.With more and more connected cars making their way onto India roads, and automated car manufacturers such as Tesla planning to set up shop in India, we will see the wider adoption and expansion of Telematics and V2X applications in the country. Given the problems of coverage, non-real time communication and network congestion, 5G would be unsuitable for automated driving vehicles. Therefore, it is imperative for the country’s regulatory body to discuss the future and explore the allocation of a dedicated frequency band for V2X services that will allow for standardisation between automotive manufacturers and traffic infrastructure service providers and enable them to develop communication protocols and device terminals that will communicate with other devices in the eco-system as well.

The future will see both Telematics and V2X mature into independent technologies that will complement each other with the end goals of improving the driving experience for vehicle users and increasing road safety as well. Both will serve different purposes and therefore should use the ideal mode of communication that is best suited for these services.