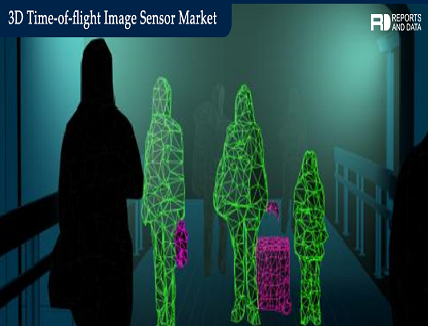 Possibly one of the most significant technological breakthroughs of the twenty-first century is the development of three-dimensional (3D) technology. It’s a depth-sensing system works in conjunction with cameras to improve facial and object recognition. Using 3D imaging technology, it is possible to capture the range, width, and height of a real-world objects with greater clarity and in-depth detail.

3D Time-of-Flight image sensors market has been growing as computer vision and industrial applications have gained traction. 3D Time-of-Flight (ToF) image sensor uses optical technology to imitate the human visual system, allowing for the emergence and application of virtual reality, AI (Artificial Intelligence), and the Internet of Things (IoT). According to Reports and Data, the 3D Time-Of-Flight Image Sensors is expected to register a significant CAGR from 2021 to 2028. As manufacturers scramble to integrate these new technologies into consumer goods such as cell phones, it has become a game-changer.

A ToF image sensor can be used for object scanning, indoor navigation, obstacle avoidance, gesture recognition, object tracking, and reactive altimeters, as well as for measuring distance and volume. The sensor’s data can also be used to improve 3D imaging and augmented reality (AR) experiences. ToF image sensors will most likely be used in phones for 3D imaging, augmented reality, and, in particular, portrait mode. In portrait mode, mobile cameras with ToF sensors can be used to blur picture backgrounds. ToF cameras can also aid in low-light conditions, as the sensor uses infrared light to detect “distance-to-subject,” allowing smartphones to concentrate even in complete darkness. The Huawei Honor View 20 launched in 2018 was one of the first commercial smartphones to use the technology. Many more flagship smartphones with ToF sensors have debuted since then.

3D ToF image sensor technology isn’t new; many companies have been experimenting with it for at least a decade. ToF technology is used in a variety of industries, including automotive, industrial, and healthcare, as well as smart ads, gaming, and entertainment. A ToF sensor could be used as a great input system for both stationary and portable computers.

ToF sensors in automobiles enable autonomous driving and enhanced safety by increasing surrounding awareness. Driven by today’s safety and comfort demands, as well as the rise of autonomous driving, the number of in-car applications for time-of-flight (ToF) technologies is increasing rapidly. The most recent systems focus on driver and passenger sensing, as well as their biomechanical and cognitive states and in-cabin control. NCAP-mandated driver fatigue detection and occupancy/child seat detection for more accurate airbag monitoring are two examples of safety functions. With the same ToF camera, additional safety features such as hands-on-wheel detection, eye gaze, head pose, body pose, and enhanced seat-belt application are possible.

Hand position contact (intuitive HMI) to control the sunroof, aircon, and radio; personalization by body, head, and face monitoring; identification of items left behind in the vehicle; and parcel classification and recognition are some of the comfort functions provided by ToF. Anti-spoof face detection for trustworthy driver recognition and on-the-go payment authorization are the most popular in-car security features.

ToF sensors may be used as human-machine interface (HMI) and for implementing safety envelopes in automation cells where humans and robots may need to operate in close proximity in the industrial sector. Digital signage will become highly interactive, targeting media contents to a particular live audience, using ToF sensors as gesture feedback and human recognition in smart ads.

3D Time-of-Flight image sensors can be used for gesture recognition in healthcare which enables non-contact human-machine interactions, resulting in a cleaner working environment. Consumer electronics, especially gaming, portable computing, and home entertainment, benefit from the gesturing capability. For first-person video games, the natural interface of ToF sensors offers an intuitive gaming interface. Remote controls, keyboards, and touch screens may all be replaced by this interface which mainly depends on 3D Time-of-Flight image sensors.

The aim of 3D ToF image sensors is to link devices to the real world in order to improve the end-user experience. Increased use of 3D sensing in smartphones has resulted in shrinking device size, less power consumption, and lower cost while increasing efficiency. This opens up new opportunities for 3D ToF image sensors in other fields as well. In coming years as automation picks up pace, 3D ToF image sensors will be playing an increasingly critical role in making the future possible.