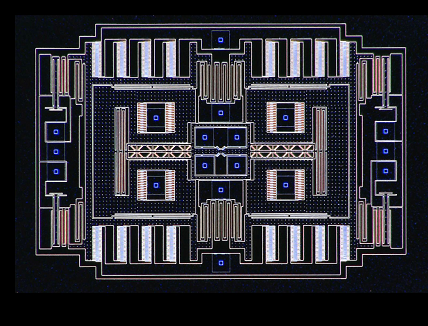 CEA-Leti scientists, in collaboration with researchers at Politecnico di Milano have developed the world’s smallest-footprint MEMS gyroscope that is capable of providing navigation-grade performance. The researchers were able to meet these specifications with a sensor footprint of only 1.3 mm2 by leveraging nano-resistive sensing.

Low-power MEMS gyroscopes are now ubiquitous in everyday objects. They monitor and control device position, orientation, direction, angular motion and rotation. With the growing development of driver-assist systems and other automated functions, the need for improved performance and robustness has increased significantly, fueled by the demand for miniaturization and cost control for real inertial navigation systems.

To address new demands for high-performance inertial measurement units (IMU), these gyroscopes must reach the navigation grade, which means improved characteristics of one or two orders of magnitude compared to the best commercial MEMS gyroscopes. Thus, they require a bias instability well below 0.1°/h and an angular random walk (ARW) of less than 0.01°/√h.

CEA-Leti, in collaboration with Politecnico di Milano, reached these targets by demonstrating performance matching the best state of the art on ultra-miniaturized MEMS gyroscopes. The results were reported in a paper, “1.3 mm2 Nav-Grade NEMS-Based Gyroscope”, in the Journal of Microelectromechanical Systems.

“This improved performance must not come with a high cost so the device will be priced competitively in large-volume markets, such as the automotive and consumer markets,” said Philippe Robert, MEMS business development manager and senior expert at CEA-Leti. “The size of these new gyroscopes must therefore not exceed 2 mm² per axis, while maintaining standard MEMS technology and using wafer-level vacuum packaging.”

Combining CEA-Leti’s expertise in highly sensitive sensors based on silicon nano-gauges and Politecnico di Milano’s expertise in gyroscope design, this new gyroscope solution reaches “0.004 °/Öhr ARW and 0.02 °/hr stability on average over several tested samples, unrivaled results for a 1.3 mm²-size gyroscope footprint”, the paper reported. The ARW and bias instability performance were highlighted on non-static operations: “After 9-minute long in-operation navigation where the gyro is repeatedly tilted by 180° constant angle rotations and by AC random motion with about 200-dps peak-to-peak value, the residual angle error at the end of navigation corresponds to only 0.07°.”

This result was achieved without Kalman filter compensation.

To keep manufacturing costs low, the team focused on both the sensor’s size and the robustness of the fabrication process, especially on vacuum-WLP. The CEA-Leti and Politecnico di Milano NEMS-based gyroscope is fully compatible with standard MEMS foundries for high-volume markets such as the automotive industry. They also are working on 3-axis gyroscope co-integration, whose feasibility has already been demonstrated, but where the objective will be to bring the same level of performance according to the three axes. In addition, to address a wide range of applications (short-term navigation in a GPS outage, indoor navigation, platform stabilization, accurate robotic motion control for Industry 4.0, guided munitions, etc.), the team ensured a resonant frequency greater than 25 kHz to withstand conventional vibration environments.

“This architecture enables best-in-class MEMS gyroscopes in terms of overall performance, size and resonant frequency, and our breakthrough 1.3 mm² high-frequency device is already at the state-of-the-art performance in terms of noise, bias stability, scale range and bandwidth,” Robert said. “Several design and technology improvements are right now under investigation.”

Manufactured on CEA-Leti’s silicon pilot line, these gyroscopes can be co-integrated with high-performance 3-axis accelerometer and barometric-pressure sensors. Because it is compatible with most MEMS foundry processes, this technology can reach markets within two years.

CEA-Leti’s and Politecnico di Milano’s gyroscope technology is protected by more than five patents and CEA-Leti’s M&NEMS platform by more than 25. The R&D team is continuing to work towards better performance, integration and cost.