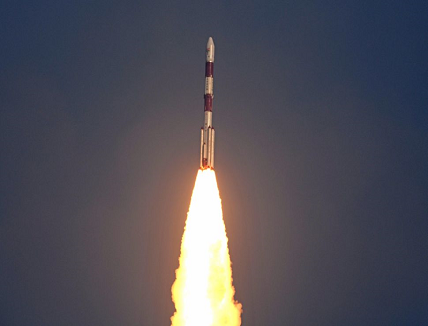 The Indian Space Research Organisation (ISRO) has once again embarked its second successful mission of the year in this COVID-19 pandemic by launching its CMS-01 communications satellite on Thursday 17th December at 15:41 hours (IST) from Satish Dhawan Space Centre (SDSC), Second Launch Pad (SLP) at Sriharikota.

The CMS-01 is the India’s 42nd communications satellite carried by ISRO’s reliable workhorse, the Polar Satellite Launch Vehicle (PSLV) on its 52nd mission. The initial lift off was scheduled for 7th of December and again delayed to December 14 due to the possibility of hurricanes and bad weather but finally took off on 17th of this month. After a flight of about 20 minutes 12 seconds, the satellite was injected by the vehicle PSLV-C50 into the predefined orbit.

According to ISRO, the CMS-01 satellite will have a lifespan of 7 years. This new satellite is first in the new CMS series of communication satellites after the GSAT and INSAT series, replacing the current GSAT-12 satellite launched on July 2011 in orbit.

The communication satellites weighs around 1,410 kg which is envisaged for providing telecom services in extended-C Band of the frequency spectrum. This will include Indian mainland and some island regions, Andaman-Nicobar & Lakshadweep Islands. The satellite is expected to boost the internet connectivity to provide coverage over the entire country in cases of disaster management.

Congratulating the space agency’s team, ISRO Chairman K. Sivan said, “I am extremely happy to declare that the PSLV-C50 successfully injected CMS-01 communication satellite precisely into the predefined sub-Geosynchronous Transfer Orbit. In another four days from now, the satellite will be placed into the specified slot into the GTO,” He added, “The mission will be fruition of the space reforms recently introduced in the country” and the mission will carry three satellites built by private entities. He also discussed about ISRO’S future missions – flagship mission Aditya L-1, Chandrayaan-3 and Gaganyaan. He further said that they were planning to have missions at the earliest.

Also the upcoming mission, PSLV-C51 is expected in early 2021 which will be special one for ISRO and the entire country as it will carry the first satellite named Anand from India’s Tech startup named Pixxel India and it will be the part of planned Firefly fleet of Earth observation satellites.

Pixxel is said to be India’s first private satellite imaging company building a constellation of earth-imaging satellite providing global coverage every 24 hours, helping the organizations to monitor, detect and predict the global phenomena in real time.