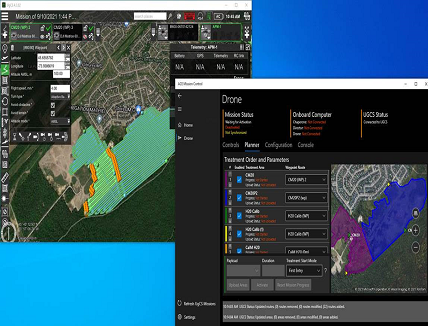 GDG Environment, a partner of SPH Engineering, reports a case study from a drone-based larviciding research program under the PMRA, Canada’s pesticide regulatory agency. The goal was to find a solution to quickly manage biological larvicide treatments in large and difficult-to-traverse locations. With only a single drone treatment it became possible to treat nearly four times faster than ground teams, and in areas very difficult or impossible to treat on foot effectively.

For a nuisance reduction program, after a summer rainfall 2021, GDG was challenged to monitor a several thousand-hectare region and treat all mosquito breeding sites within it in just five days. As a result, biological larvicide treatment was applied to nearly one thousand ha of areas producing mosquito larvae  by GDG’s drone division in 2021.

“Once a mosquito egg has hatched, in ideal conditions, the mosquito larvae can potentially pass all stages of development and emerge as an adult as fast as in five days,” Benjamin RUSSELL, a Project Supervisor at GDG Environment, explains. “When a mosquito emerges as an adult, the only effective pesticides are adulticides, harsh broad-spectrum chemicals, which we do not use. Timing and speed advantages offered by using a drone were critical for the program’s success”.

As the world of drone technology moves quickly, GDG Environment brings different drone and payload models into their fleet to work on reducing mosquito nuisance. Since 2018 it has been opting for SPH Engineering’s solutions, UgCS, a ground control software, and later on UgCS .NET SDK, a tools set for developing custom applications on top of UgCS. The company has developed an in-house platform for automating their payload functions. With automation, GDG can now begin to scale into performing treatments with multiple drones. The platform simplifies the procedure, allowing the same number of personnel to safely employ more complex operations.

“SPH Engineering does a lot of the heavy lifting for us, like creating area scans, sending GPS missions to the drone, providing real-time telemetry, and it’s reliable. It wouldn’t make any sense for me to rewrite all of that myself when I could just integrate automation into UgCS with SDK”, Benjamin RUSSELL adds.

“I believe that any modern industry can be measured by the amount of available technologies, helping to deliver socially important products to the market faster. I am proud to see how UgCS .NET SDK has become a software base for a drone service provider to address the issue of protecting local communities from a natural threat”, Alexei YANKELEVICH, Head of Software Development at SPH Engineering, comments.

For pesticide application within Canada GDG obtained authorization from Health Canada for the purpose of conducting research under the Pest Control Products Regulations only. As of today, drone-based pesticide application services outside the scope of the current research cannot be offered, however, GDG is looking to use their technology to expand the drone services they offer into the fields of agriculture, forestry, public health, and food safety.

To learn more watch the video.