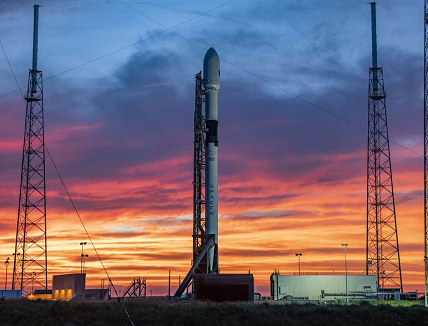 Carried on SpaceX brand new Falcon 9 black five (B1062.1) rocket from Cape Canaveral Air Force Station, Florida’s Space Launch Complex 40, the GPS III SV04 Space Vehicle is the latest and the upgraded version of satellites. The brand new Falcon 9 rocket successfully recovered the booster on its drone ship “Of Course I Still Love You” in the Atlantic Ocean. It is the 97th launch of Falcon 9, the 64th booster landing and 20th mission for SpaceX in 2020.

Built by The Lockheed Martin, this satellite is designed to modernize the US Space Force GPS constellation and GPS fleet with the aim of replacing the current aging GPS vehicles with the upgraded one to provide secure and advanced navigation and improved anti-jamming technology. “The GPS III program continues to make strides in modernizing the GPS constellation for the U. S. Space Force while maintaining the gold standard for position, navigation and timing,” said Col. Edward Byrne, Medium Earth Orbit Space Systems Division chief.

GPS III SV04 is three times more accurate and advanced than their former one with enhanced efficiency of navigation and anti-jamming capabilities up to eight times. Being embedded with 23rd M-Code signal makes it more secure and capable against cyberattacks. From the perspective of civilians and commercial purpose this satellite is more user friendly due to the new “L1C civil signal” which is compatible with Europe’s Galileo global navigation satellite system and makes it more efficient to have communication with the navigation systems of other satellites in space.

“The launch of GPS III SV04 is a testament to SMC’s ability to rapidly and safely deliver new capabilities on orbit,” said Cordell DeLaPena, Air Force program executive officer for SMC’s Space Production Corps. “At SMC, we are proud to deliver our fourth GPS III satellite and will continue to operate at an accelerated pace to enhance the capabilities of the billions of users worldwide.”

SMC’s Launch Enterprise director Col. Robert Bongiovi said that he is proud of his team’s 83rd successful National Security Space Launch and looking forward for more future missions with SpaceX . He further added that their expertise to embrace innovation with their launch providers not only advances warfighter’s capabilities but also lowers costs to the U.S. Government and its taxpayers.

Lockheed Martin has got the contract to build up to 22 additional GPS III satellites with new additional technology and more advanced capability including a new Regional Military Protection Capability. Five more GPS III satellites are undergoing production and the next satellite GPS III SV05 is also on the way to be launched soon.